Good For One Fare 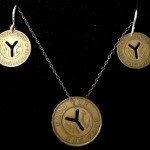 It’s fun to reminisce about growing up in New York City. It was during the 70’s and 80’s, and things were very different. I walked to and from school by myself from age 8 (!), just asking myself to get abducted, but I never did! I got “mugged” once, but ran away before the pre-teen hoodlums got anything from me. I knew the prostitute on the corner and said “hi” to her every morning. I played with my friends in Riverside Park in 6th grade and even got flashed by some creep once. Ah, the memories.

It is probably cliché, but there’s a very palpable “street smarts” that develops when you’re a New York City kid, a maturity that is thrust upon you. It is not a woeful loss of innocence, though, but rather an exhilarating rite of character.

Traveling on the subway with my parents, and alone sometimes, was common. The smell of hot urine still transports me back to my youth. Don’t ask. We had to buy tokens from the people in the booth — the indignant and painfully bored specimens who are, nowadays, not as “needed” as they were then since the introduction of the Metrocard. We moved away in 1988, so I was not there for the switch from token to card. (That happened in 2003, apparently.) But when I would visit the city later, I admit I felt a sadness for the death of the token. I imagine the people of Western Europe felt that same sadness when having to give up their beautiful coins and bills for the insipid Euro. Where is that money now? It deserves to be preserved in a museum! Maybe it is. Isn’t our currency a relic of our nations’ individualities and economic success and failures? Replacing it with something generic and personality-less is tragic. *

* I apologize for offending anyone who loves the Euro. I am sure there are many economic benefits to the Euro, and it is no doubt considered beautiful by many.

I remember fondly the tokens we used with the Y cut out of the middle. They started making ones without the cutout in 1980, when I was 10. But the ones with the cutout hold a special significance for me, maybe because they are the tokens of my youth. Hell, maybe they represent my youth!

So, the idea to make a necklace out of one of these cutout Y tokens was exciting. I knew I wanted to make one for my mother, a New York “expat”  living in Los Angeles, who is and always will be a true New Yorker. The cutout would be the perfect hole for a chain, and how funky and nostalgic! So, I did it! The small Y cutout tokens were not in circulation anymore when I was in the city. Or at least I don’t remember them. But getting ahold of a couple of the small ones in order to make matching earrings was a stroke of brilliance, if I do say so myself.

A gift that preserves the past by reusing a useless relic – what was once thought to be “good for one fare” can now be good for a lifetime! 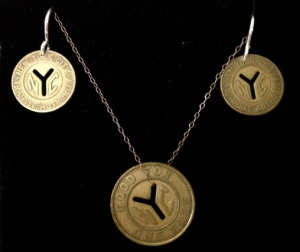 Posted in Uncategorized | No Comments »

No Commentsto Good For One Fare